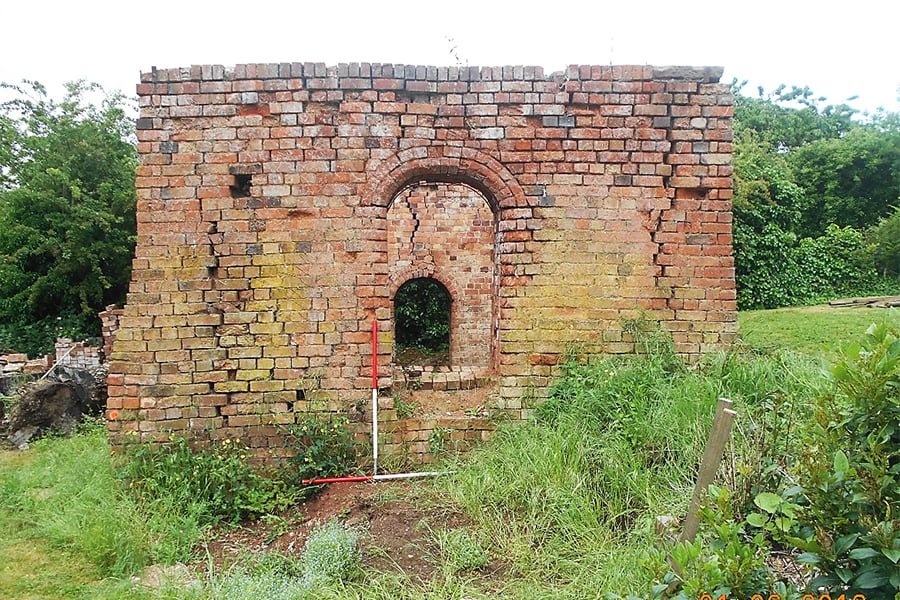 An article by TEP’s Heritage Team has just been published in the Leicestershire Industrial History Society’s newsletter: an exclusive publication that encourages the study and recording of Leicestershire’s industrial past. For the latest edition, TEP submitted their project Diseworth Brick Kiln.

The project involved a historic building recording and watching brief of the 19th-century brick kiln to the rear of Kiln House, Diseworth, Leicestershire. The project came about due to the brick kiln building being incorporated into a new-build house and retained as part of this structure, which required an archaeological recording prior to the works commencing.

The kiln was constructed in the 18th century and historic mapping shows the brickyard was expanded in two phases of development by the end of the 19th century. The British Geological Survey records clay deposits in the village, particularly to the south of the brickyard which is close to Diseworth Brook. The brickyard would have utilised both these local material resources. Bricks produced in the village were used in buildings all around Derbyshire and Leicestershire. It was also thought that the local bricks were also utilised in Diseworth, to build small terraced houses for the brickyard workers. When local building projects increased, so did the demand for bricks. Therefore, smaller new works were often opened to supplement the supplies from larger, more permanent kilns.

The kiln was a detached single-storey structure, roughly square in plan and measuring approximately 5m x 6m, set into a retaining earthen bank in the garden south of Kiln House. The walls were constructed of red brickwork, standing at approximately 4m in height and were tapered in cross-section from 900mm wide at ground level, reducing to 550mm at the top of the wall.

The kiln formed an open-topped rectangular chamber with entrances at the east and west sides. Eight fire grates for loading fuel were recorded; four in the north wall and four in the south wall.

An earthen ramp to the wicket (opening) at the east elevation of the kiln may have been in place to help load the kiln from that side. The north and south walls were slightly tapered at the bottom to help with the airflow, with a series of fire tunnels/grates at the base.

Kiln typology identifies this example as an open-topped Scotch kiln, a type first introduced in the 17th century, which was originally fuelled with wood. The Scotch kiln type was popular in the Midlands, and many of the 18th and 19th-century brickyards recorded in Leicestershire are likely to have had a Scotch kiln too.

To learn more from the Leicestershire Industrial History Society and how to subscribe to its newsletter, please visit: http://lihs.org.uk.