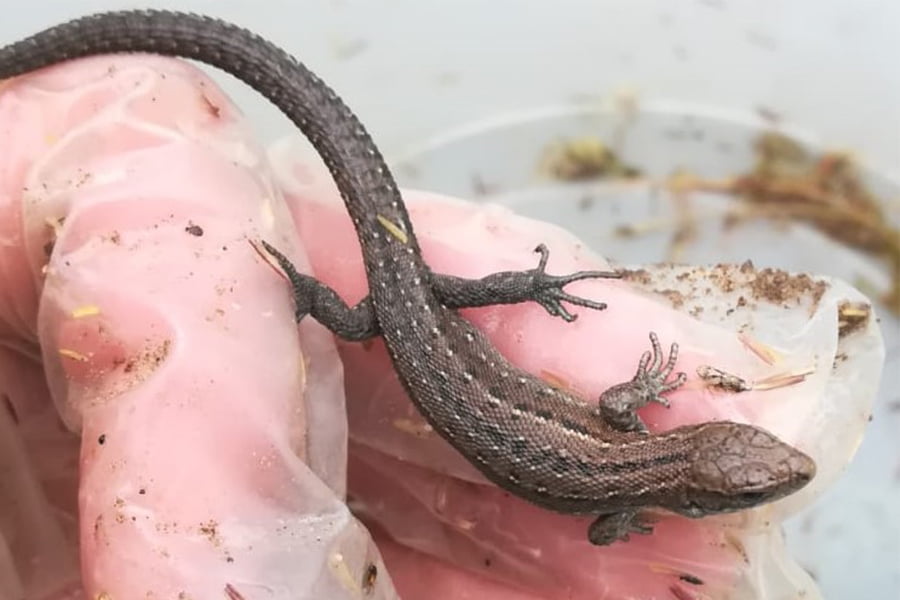 At a site near the Trent Valley in North Lincolnshire, where wind-blown sand deposits from the end of the last ice age nestle beside an area of heath and a ridge of hills, TEP ecologists are busy moving lizards into an area of new habitat.

North Lincolnshire is unusual as it has large areas of wind-blown sand deposits known as coversands. Ecologically, coversands are of interest for their vegetation, which is often a mix of acid heathland and calcareous grassland. They also provide excellent habitats for reptiles, especially the common lizard. Also known as the viviparous lizard, the common lizard is unusual among reptiles as it incubates eggs inside its body and gives birth to live young rather than laying eggs. Common lizards are also protected in the UK under the Wildlife and Countryside Act, 1981.

The site had been selected for sand extraction but before works could commence, reptile surveys were undertaken and a good population of common lizard were found to be present throughout the site. A mitigation strategy was then devised to avoid harm to the population during the planned extraction works, which are programmed to take place over several years.

TEP Ecologists designed a strategy that would involve surrounding the extraction area with reptile fencing and translocating the lizards into undisturbed habitats beyond the fencing. The strategy included the creation of large brick and turf hibernation mounds to release the lizards into, as well as enhancing the grassland and scrub with new log pile refuges. These will provide cover from predators and increase the carrying capacity.

Fencing and habitat creation works were carried out by contractors under the supervision of TEP ecologists. So far, over 100 lizards have been translocated into their new habitats. A large number of common toads have also been translocated, as these were found sheltering under the mats used to attract lizards for capture. Once the site has been successfully cleared of lizards, sand extraction works are free to commence. The fencing will remain in place until the completion of the works, which will prevent the lizards from dispersing back into active extraction areas.

If you have found reptiles on your development site or would like more information on mitigation strategies, please get in touch by emailing ecology@tep.uk.com or to learn more from our ecology team click here.