Teesworks: A Snapshot of Our Industrial Past 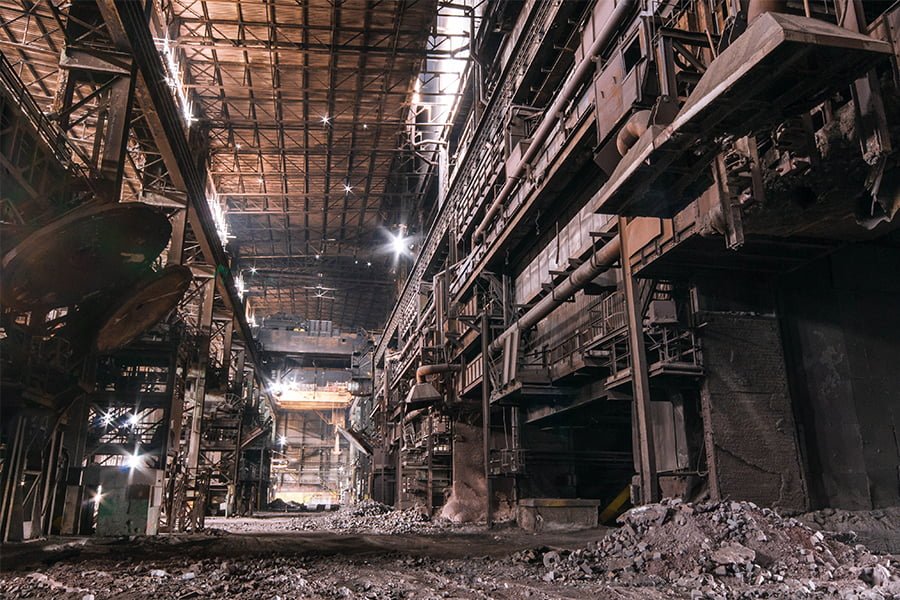 TEP’s Historic Environment team record a wide range of historic buildings and last year was no exception. The team recorded a substantial industrial site, which was among the largest such types of recording undertaken by archaeologists. The site included the Redcar Iron Works and the Lackenby Steelworks and plant at South Bank. An area collectively referred to as the Teesworks Industrial Zone, the largest and most connected industrial zones in the UK. Tees Valley Combined Authority commissioned TEP to produce an archaeological record of the site, including the various processes of materials movement and manufacturing that took place at the different areas of the works.

The extensive site is over 5km from one end to the other and the larger buildings can be hundreds of meters in length with multiple levels. The scope of recording encompassed several substantial buildings and plant including a blast furnace, which at the time of construction was Europe’s largest such facility, standing at a height of 104 meters and capable of producing up to 11,00 tonnes of iron per day.

Producing a comprehensive record of the site including all major buildings as well as the associated networks of conveyors and stockyards presented the team with a logistical challenge due to time and safety constraints. Over 4000 high-resolution photographs were taken over two weeks including main exterior elevations, views of principal rooms and spaces and details of plant and equipment. Interviews were carried out with key plant operators and site managers to provide technical information regarding the operation of the site. An archive visit was also carried out to help provide a comprehensive historic background and aid in understanding the social significance of the site to the local area.

The areas of Middlesbrough and Redcar have a long-established tradition of iron making dating to the mid-19th century. However, much of the recorded facility dated to the late 1970s at which time British Steel undertook a significant programme of construction to produce a modern high-capacity facility. A common theme noted by the project was that at every stage of the works, major efforts were put in place to ensure the site ran at optimum efficiency. Recycling waste material wherever possible, collecting and cleaning non-usable waste products, and reducing environmental impact.

The works process began at the purpose-built ore terminal on the Tees Estuary, which was commissioned in 1973 and was capable of unloading ships at a rate of 2,000 tonnes per hour. The raw materials primarily comprised iron ore and coal as well as fluxes such as lime and dolomite and were transported to substantial stockyards and conveyed around the site via a complex network of conveyor belts and weighing hoppers. The iron ore was distributed to the sinter plant for processing and used in the blast furnace. While the coal was sent to the coke ovens to be carbonised for coke.

The role of the Sinter Plant was to process raw materials to create nodules of a consistent size and composition for use in the blast furnace. In essence, the sintering process consisted of mixing raw materials which were fed onto a 185m long continuously moving conveyor, where they were baked, then crushed, cooled and screened.

The coke ovens were designed to convert raw coal into coke, which served as fuel for the blast furnace. The coal was heated in a series of ovens in low oxygen, to produce coke of consistent composition. The two oven batteries each had 66 ovens operating continuously, with each charge cycle lasting up to 18 hours and producing 20,000 tonnes of coke per week.

The sinter and coke were conveyed to designated stock bins for storage and transported to the top of the blast furnace by using a single conveyor over 400m in length. This is where the material was deposited in controlled layers into the 42m tall, 14m wide furnace. Hot air was blasted under force into the furnace causing the coke to combust and melt the iron, which percolated to the base of the furnace where it was tapped and channelled and conveyed into special locomotive cars called ‘torpedo ladles’.

In addition to the iron-making facilities, the ironworks site included an array of supporting plant including a dedicated Power Plant, which was among the largest in Europe at the time of construction, gasholders and by-products plant where waste products were cleaned and processed and useful materials reclaimed for re-use or sale, as well as offices, stores, workshops and laboratories.

The Teesworks site included a dedicated rail network which allowed the molten iron to be quickly conveyed to the steelworks. The Basic Oxygen Steelmaking (BOS) Plant received the molten iron, which was transferred into 240-tonne capacity converter vessels where oxygen was blown in and additives included to convert the iron to high-quality steel. The steelworks building was made up of a series of steel-framed bays measuring up to 700m in length and with the larger bays being up to 70m in height. Large overhead cranes were employed to carry heavy ladles filled with molten metal around the various stations. The molten steel was poured into continuous casting moulds where it was formed into straight ingots for immediate use in adjacent rolling mills or for sale as raw material.

The final report included a full historic background, as well as technical descriptions of all the main buildings, including all principal plant and manufacturing processes. The document, once submitted, will be available to the public through the Archaeological Data Service.